I'm finishing work in three days' time.  For good.  (Well, I've no plans to work any more, in fact very few plans to do anything at all).  I'm retiring after working for the same organisation for nearly 40 years, so I'm expecting it to be quite a shock to the system.  In fact, it struck me (all of a heap) this week that I don't really know who I am, but I certainly am about to find out.  I hope I'm not the lazy person I know who crashes out and colonises the sofa when not at work.  I hope I'll read, and sing, and ring bells, and go to London, and lunch, and travel ... and ... and ...  Oh, and join committees.  I copped one only this evening.

The past couple of years have been quite tough going.  Work has been stressful, and it filled my mind.  It has been a time of huge and not very agreeable change in my professional world.  People have been hating what I and my colleagues have had to do, and I've had to summon up all my powers of persuasion to convince them that we're trying to make the best of a difficult situation and are still succeeding in doing great work.  I couldn't talk publicly about a lot of what my working life was like, and didn't want to if I could.  So that has been a bit of an obstacle to making anything of this blog.

But now, I have all this time stretching out to fill with things that please me, for a change.  That is, once I've stopped saying 'Yes' to everybody (must rid myself of that habit).  And I want to write about it and show pictures of it and post links to it.

I'm really looking forward to picking up this blog again!

Lots of Proms and Rude Britannia

How I love holiday weekends!  The treat of that extra day off.  I think I've overdone it this past week - risking sensory overload, and a quiet Bank Holiday Monday doing as little as possible is just what I need.

On Monday, I went to see 'Deathtrap' at the Noel Coward Theatre, a rip-roaring old fashioned mystery thriller, with more twists in the plot than you could shake a stick at.  It's an Ira Levin warhorse, with everyone displaying their best US accents (including Jonathan Groff, who sported the real thing) except for Simon Russell Beale, playing himself to the hilt - which is what we all wanted to see, of course.  A nice night's entertainment, with perhaps just one twist too many.
Then Proms on Tuesday, Wednesday and Friday.  I've made a vow that from now on I will give any Prom programme featuring Scriabin a miss - even if is is my lifelong hero Ashkenazy conducting.  All made up for on Wednesday, with the Holberg Suite by Grieg played with great verve by the Norwegian Chamber Orchestra, and Mozart K491 directed from the piano by the superb Lief Ove Andsnes.  On Friday, gorgeous Bruckner from the Minnesota Orchestra.  It's such a wonderful privilege to see these world orchestras at the Proms.  I think it must be a record season - I've been to about a dozen concerts so far, and they've all been virtually full.  Great support for this uniquely wonderful music festival.
Then today, reminded by a friend of mine that I was in danger of missing it, I headed off to Tate Britain to see the exhibition Rude Britannia - visual humour, satire and absurdity from the 17th to the 21st centuries.  I am still grinning at the thought of some of the work I saw there.   But it was rather an odd experience.  The first thing that gave me pause for thought was a 'Don't Sue Us'-style notice at the entrance, to the effect that some visitors might find some of the material offensive, that in certain cases there were warning signs next to the art-works, and that staff were on hand to advise in any cases of doubt.  The clue is in the title, perhaps?  Might people not have seen a particularly scurrilous Gillray print or vicious Steadman cartoon, or have heard of the legendary excesses of Viz comic?  Seemingly not. What on earth is the world coming to, I wondered?
Another thing that struck me was that, threading my way through all the visitors plodding round the rooms, I occasionally heard the sound of laughter, and it was always my own.  I was obviously not behaving very well, not as an exhibition-goer should.  But the wall-high Viz cartoon spoof of art criticism, Steve Bell's John Major and his burning underpants, and Robert and Roberta's bonkers posters are all riotously funny - so I'm sorry to say I laughed at them. I'll behave better next time, I promise.
Posted by Hilary at 22:15 1 comment: 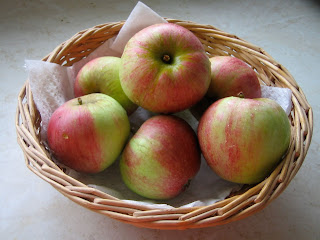 We've been promised / threatened a storm of epic proportions later today - well, epic for August, anyhow.  So today we picked our apple crop, before the wind took what the wasps have left.  We've got a little Worcester Pearmain tree in the garden.  Until we tidied up drastically earlier this year, it was surrounded by shrubs, rather choked by them, and out of reach. We didn't treat it very well.  Now we have hacked a way through to it, the reward is a lovely little crop of apples - enough for a week or two, which is just right, as Worcesters are early, very sweet and not at all long-lasting.  What better way to work out how to 'insert an image' than to post this picture of some of our beautiful apples.

Then we have to wait until November for our next lot - from a very sulky tree with the splendid vaguely Janeite name of D'arcy Spice.  The apples are lovely tart pippins, but we rarely get more than a handful.  I can count how many we'll have on fingers and toes - and they have to stay on the tree for another three months.  Hope they hang in there!
Posted by Hilary at 18:30 4 comments:

If you find your way to this blog - welcome.  This is a very tentative venture into blogging by myself, after a couple of years as a member of the blogging collective Vulpes Libris.  I have no idea right now if I've got what it takes to compile and sustain a regular blog, but here goes!

I've set it up for a number of reasons, one of which is to experiment with techie things that I'm too scared to try out on Vulpes Libris, in case I consign that wonderful site to oblivion with a careless keystroke.
Setting up a Blog is also one of the '23 things', a learning scheme for social media, at the end of which you get your Digital Migrant's papers stamped, and become a Digital Citizen.  We're developing this training in my workplace, so this is my homework.
I'm not sure yet what I'll post here - maybe some good things that have happened to me, lovely places I've seen.  I expect I'll record my impressions of what I've read, from time to time, especially if it's a recommendation from one of the Bookfoxes (if it isn't, I'll most likely be reviewing it there first).
Okay, well, I've just previewed my very first post, and have already seen that one of my experiments is yielding useful information.  I'd added some code for the 'Add To Any' Share this button - only to find that Blogger has its own. So out it comes again.  I didn't try and mess with the scripts under the bonnet of VL!  And Wordpress - a word in your ear - if Blogger can incorporate a Share button, so can you.
Posted by Hilary at 15:50 2 comments: